Dragon Age: Inquisition comes out in ten days in the UK (seven days for the US, nine days for the EU outside the UK), so now seemed the right time for a proper preview (regulars will know I’ve posted quite a bit about this game already but we’re at the maximum level of pre-game knowledge now). It comes out for the PC, Playstations and Xboxes. Naturally the PC and current-gen consoles have better graphics, but in terms of gameplay and content all platforms have the same offering. If you have an Xbox (not sure if it's only One or 360 as well) you can get early access in a couple of days via the EA subscription service.

I’m going to adopt a minimal spoiler approach. There will be some relating to how gameplay works, very basic details (some of which have been known about for over a year) regarding the plot/companions, but I will do my best to keep spoilers to a bare minimum. So, if you’re deliberately starving yourself of info to avoid the venom of spoilers poisoning the delicious cake of Inquisition, this should be the preview for you. It’s pretty lengthy, I should warn you. 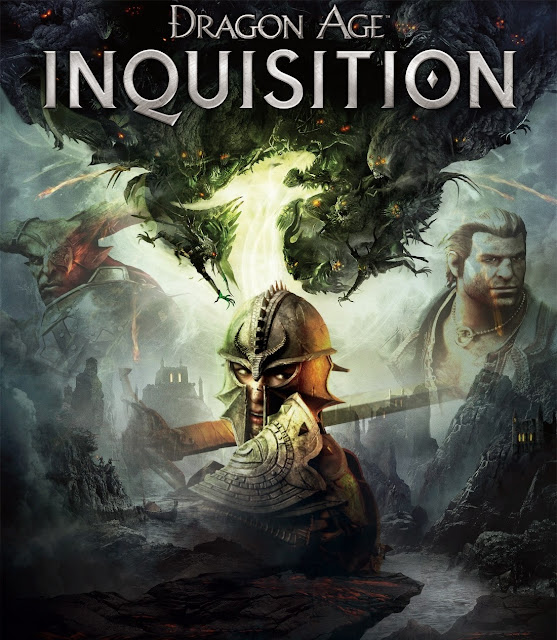 This is either very good news, if you’re connected to the internet, or very annoying news. The Keep (which you need an Origin account to access) is an online, browser-based feature which basically allows you to customise the choices that were made during Dragon Age: Origins, Dragon Age 2 and DLC (you do not need to have played any of that to make the choices). These will then have an impact on Inquisition, and your world state will be imported during character creation. The upside is that if you’re shifting consoles (or going to/from PC) you can recreate or amend past decisions without playing through whole games, and that if you’re new you can easily get to grips with the backstory (each decision is concisely explained). The downside is that you cannot import saves directly and that if you lack online connectivity to your console then you cannot alter the world state from the default. I think it’s a shame there isn’t a basic Keep for major decisions on-disc. If you’re online, this should be fine, if you’re not, it’s a bit disappointing [NB I know it’s not encouraging to start on a downer, but I should stress this is about the most negative view I have of the game].

The Keep is now in Open Beta, so you can access it but it isn’t quite finished. I strongly advise getting this sorted ahead of time so that you can just import your finished world state on the day.

Character creation is more in-depth and has more options than any previous Dragon Age game. There are four race choices (dwarf, elf, human, Qunari), both genders and two voice options per gender (one English, one American [you can test them during character creation to see which you like]).

There are the usual options you’d expect, but many features (eye colours for inner/outer iris, tattoo colour, makeup colours) use a colour wheel which effectively means you can pick any colour on the spectrum. For the first time, scar intensity and location can be altered.

Certain features (ears, noses) can be altered using not only presets and sliders, but also a grid system which gives great versatility when it comes to how wide/pinned back ears are, and so forth.

Female dwarves can have beards, although it’s fuzz rather than full-blown man-beards. Adam’s apple size can also be altered, for both genders, and male characters have full access to makeup. Qunari horns can be varied considerably, though there are fewer hornless/hairstyle options, and hair colour is more limited in range than for other races.

As with previous games, classes are only limited in that dwarves cannot be mages for lore reasons. If you choose rogue or warrior then you also choose archer/dual-wielding daggers and sword & shield/two-handed weapons respectively but this does not lock you into that play style (you cannot change class in-game but you can shift from dual daggers to archer, for example).

I’ve seen a few videos of character creation and, to be honest, it looks tremendous. The lighting has been designed to be neutral, giving a good indication of your appearance (usually a problem with character creators), and it’s worth noting there is no capacity, at launch, to alter your face once you’re in-game.

A significant complaint about Dragon Age 2 was the lack of capacity for customising companions (almost none, in fact). This has been very, very dramatically improved upon for Inquisition.

For a start, you can actually change their armour. I know this is Videogames 101, but you couldn’t in DA2.

Even better (and quite surprisingly because it must’ve taken a huge amount of time) almost every piece of armour changes shape to suit the style of the individual on whom it is equipped. I think a few stay the same on whoever wears them, but the vast majority will change. So, a robe on an Inquisitor will look very different than it would on the mage companions.

For the first time, we can craft our own armour and weapons. Better still, using varying materials (whether metal, stone or cloth) will alter both the appearance and the stats of armour and weaponry. Multiple colours of each armour can be changed this way (NB you do need to acquire schematics to do this), and it suggests a very high degree of crafting customisation.

In addition, the home base of the Inquisition can be customised in both stylistic terms with decoration, and in terms of more practical advantage (for example, making a garden in which you can plant herbs to grow more).

Potions and the like can also be crafted and customised, so the infamous Jar of Bees can be improved by adding wasps.

This is one of the hardest things to assess without actually playing, so I’ll summarise what we know factually and then try and surmise how well, or badly, it’ll work.

Combat will be fairly fast-paced, but the tactical camera will return and be available on all platforms this time (for those unaware this will enable the player to pause combat, issue orders and then either end the pause or run time forward a little and issue more orders).

There is very little magical healing [reports of there being none are false, but it is rarer and more difficult than past games, and there is no ‘healer’ set of spells]. Potion healing (with a limited number that can be increased via perks and the like) does come back. Health regeneration out of combat is strictly limited based on difficulty. There are various ways to increase health through perks or to diminish damage likewise (a barrier spell, for example, makes a barrier that takes damage instead of health so long as it lasts).

A character who runs out of health in combat can be revived by a spell or by a nearby character, provided the reviver is not attacked for a little while.

Spells seem to offer more tactical options (for example, you can make a wall of ice which could close off a corridor) than past games.

There will not be second waves of enemies all the damned time (as in Dragon Age 2) but this might happen very occasionally.

Combat can often be a weak spot in RPGs (except for Dragon’s Dogma, which somehow managed to be an RPG with fantastic combat and somewhat rubbish world-building/story). My guess at this stage is that it’ll work pretty well, without being trouser-explodingly good.


Is it open world?

Jein. There are specific areas (forested, desert, mountains etc) but these are very large (many are larger than all of Origins) and I believe there are well over 20. Within these areas there’s lots of scope to explore, so much so steeds were introduced so you could get around more quickly (fast travel is possible within areas).

Reports from journalists who’ve played the game suggest a total size comparable to Skyrim, and possibly even bigger.

So, it’s not a true open world, but there is a very large world and plenty of room to go off the beaten track. One thing Mike Laidlaw, Beardmaster of Bioware, said was that he wanted every area to have at least one location that wasn’t part of any quest and that was just there to be found by exploring.


How the Inquisition works

The Inquisition will almost be a character in itself. It will gain power as you progress through the main and side-quests, enabling you gain perks. In addition, the choices you make will have a lasting impact (choosing between rival sides in a war, for example). You will also be able to send agents out on missions independently of what you and your companions do. So, it’ll be more than the Grey Wardens were in Origins. If you played Awakening, it sounds like a much more developed version of how that worked.

As you conquer areas you can ally or destroy certain groups, and the forts you take can be dedicated to trade, espionage or military might.

The Inquisitor will be able to make judgements about certain individuals, with a wide range of options over the course of the game (I’d guess only a couple per individual).

The world is embroiled in war and attacked by demons, and to quell the turmoil the Inquisition is formed. It is not loyal to a nation or religion, but is a law unto itself and seeks to impose order. This can be done through nice or ruthless means, and whilst there isn’t a ‘full evil’ option (after all, you’re there to save the world, not end it) it seems you’ll have a pretty wide range of options from pragmatic brutality to peace-making compromise.

That’s based on many things I’ve seen and read ahead of the game’s release, but that’ll only be proven (or disproven) with the game itself.

Once the main story is complete, unlike all previous instalments, the game will not end. Instead, you will be able to keep playing. There is no New Game Plus option.

The Inquisition is not a one man band. In addition to the Inquisitor (the player-character) there are nine companions (three each of warrior, rogue and mage) and three advisers who advocate diplomatic, espionage and military means to resolve problems.

Several characters return (Varric, Cassandra, Leliana, Cullen amongst others) and others may or may not based upon the choices you make in the Keep. There’s a large number of romance options (I think at least four regardless of gender/race, with more possible for certain combinations). Those characters interested in amorous relations have a set sexuality (gay, straight, bi) unlike Dragon Age 2, where anyone would shag Hawke given the chance.

Given it’s been described by many developers and journalists as a massive game (I’ve heard 30-40 hours, or more, for the main storyline and 150-200+ hours for all the things in the world) I won’t wait until I’ve finished my first playthrough to do an initial review. As I’ve done for other games (such as Skyrim) I’ll do an Early Thoughts review, indicating my view based on the first few days or so. Once I’ve completed my first playthrough I’ll do a more comprehensive review (not sure whether I’ll go straight arrow through the storyline or dilly-dally picking mushrooms, so it could be over a month before I finish it).