With Crown of Blood out early next month (6 April), I thought it might be interesting to consider the pros and cons of writing a trilogy, compared to writing stand-alone novels or a loose series, which has plots contained entirely within one novel but a recurring cast and world.

Pros:
Tell a bigger story
Allows more detail for secondary characters
Readers perhaps likelier to buy books 2 and 3 of a trilogy than books B and C of a loose series

Cons:
More complicated which means more planning is required and writing takes longer
Telling story arcs that work both within each novel and across the trilogy is difficult to balance
Readers often don’t want to start an unfinished series

People do like series, whether the traditional trilogy or larger scale mega-series (I’m reading the third entry in the Stormlight Archives myself right now). From a writing perspective, if someone likes book 1, they’re likelier to get books 2 and 3 of a tight series (with a single ongoing storyline) than books B and C in a loose series (with recurring characters but self-contained plots). Obviously, writers like selling books, as it gives them a warm, fuzzy feeling as well as the means to afford little luxuries, like food and rent.

Naturally, a tight series enables a larger, more complex/intricate story to be told than a single volume self-contained novel. Some stories are just too big to cram into one normal sized book (there is the enormo-book option, but some people are put off by a page count measured in the thousands). When I think about The Bloody Crown plot and trying to cut that down to one ordinary-sized book, it’s difficult to think what I’d discard to make it fit.

This brings us to the start of the cons list. A bigger story means it’s more complicated, and splitting the plot between three (or more) books means more planning is required. All that takes time. On top of getting that right, the division also means you need ongoing plot threads that are tied up in books 2 and 3, whilst also having self-contained and completed plot arcs within each individual book, otherwise a book, whilst having a place within the series, feels a bit under-cooked. That’s a tricky thing to get right.

Another problem for writers is that, particularly with larger series, later entries can be delayed. And some readers are reluctant to start series that aren’t finished. Which makes them being finished less likely if the first instalment is released before the others are ready to go, because fewer people buy them and the author sees little interest. Of course, you can finish the whole thing and release them with 2-3 week intervals, but that means writing, redrafting, editing, and proofing the entire trilogy/series before seeing any return at all.

Personally, my favourite approach is to have a loose series, as most of the pros of a tight series are present, but the significant drawbacks are not. It makes books quicker and easier to write (along with, for the Sir Edric series, fewer POV characters and being comedic rather than serious in nature).

For those wondering, my next move will be to sort out the release of Sir Edric and the Corpse Lord (Hero of Hornska book 4), which I’m hoping to release in the latter half of 2019.

Posted by Thaddeus at 07:52 No comments:

Crown of Blood – out 6 April

Crown of Blood, the final part of the cunningly entitled The Bloody Crown Trilogy, is coming out on 6 April (paperback to follow). 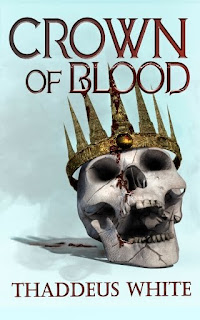 The fate of the crown will be determined, as the rival Houses of Penmere and Esden find themselves faced with a dilemma: unite to fight off the King of Felaria’s sudden invasion, or risk losing the entire kingdom to the invader.

It’s the fifth book I’ve written that takes part in the Bane of Souls world (the others being stand-alones Bane of Souls and Journey to Altmortis, and earlier trilogy entries Kingdom Asunder and Traitor’s Prize).

As well as the splendid cover, by Autumn Sky, there’s a map, by me. 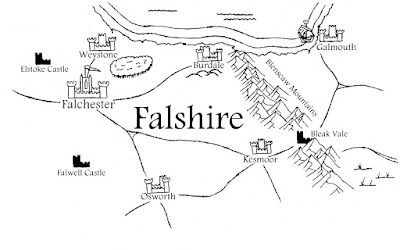 For the pre-order period and first fortnight of release, Crown of Blood will be just $2.99, after which the price will go up a bit. So, buy it, and tell your friends to buy it too.

You can pre-order it on Amazon or Smashwords, and it’ll shortly be up on other retailer sites too.

Posted by Thaddeus at 13:48 No comments: