Yes, yes, pre-ordering games is generally a bad thing. But this game, by Obsidian (makers of Fallout New Vegas and Pillars of Eternity) looked very good indeed. And, so far, I’m not regretting the decision at all.

At the time of writing I’ve played about six or seven hours or so, and have left the starting area.

The Outer Worlds is set in a new alternate reality future, in a distant star system which is run by corporations in a rather dystopian way. You play a chap or lady thawed out from a ship where hundreds of people ended up as popsicles rather than colonists.

There’s a lot I like about the game, and a few minor gripes, so I’ll outline the downsides first. The subtitles are too small. Doesn’t affect me personally but if you rely on them I can see that being frustrating. Textures take a little while to load in. It does make the fat PS4 scream a bit, although this is a console rather than game problem, and the inventory menu helps it to calm down.

The plus side is that all the big stuff, so far, is good. Sometimes very good. The setting, the story, the dialogue, all are great. The combat is fine (this isn’t my area, really, but it’s fine on the standard difficulty setting). The cold, bureaucratic nature of a corporate dystopia contrasts brilliantly with the exotic and vibrant alien worlds. When you leave the office of the first bigwig you meet, having been invited to do him a dubious favour, you can look up and see the dazzling sky of another world.

The whole colony is run by a few major companies (with only one space station excepted), where people are seen as biological components in a corporate machine. But despite this, the members of corporations often come across sympathetically, as decent people stuck in a difficult place (not unlike the real world, where perfectly good people can get lumbered with less than lovely work). This adds depth and plausibility to the world, and is enhanced by the humour. This brings another dose of realism, without being over-egged.

I’ve kept stuff story-light because I don’t want to spoil anything, so all I’ll say is that the early stages are promising. Side quests and main story missions often have varying potential outcomes, and you can screw up tasks entirely (I believe you can kill anyone, but I’m playing as a nice ex-elevator technician so I haven’t tested it myself). The companions seem to be quite diverse in their personality (when it comes to combat you can mould them as you wish, so only personality matters when picking who to take).

In short, it’s really rather good.

Posted by Thaddeus at 18:17 No comments:

Sir Edric and the Corpse Lord – out 22 October 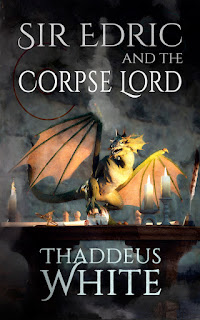 Yes, kids, two books in one year. Veering dangerously close to looking productive (as an aside, things will be quieter afterwards).

In the latest volume of the eponymous knight’s biography, Sir Edric Greenlock, the Hero of Hornska, takes advantage of opportunity to leave the city and avoid getting murdered for a recent bout of adultery. Aided by his trusty manservant Dog and annoyed by squabbling mages Drusilla and Cecil, Sir Edric heads south to Lake Longsoul. Caught between the undying lord of countless walking corpses and the vengeful attention of an elven prince, Sir Edric will need all his cunning just to survive. And if he fails, the whole world could turn to a twilight of undead…

So, it’s the usual fun and games, but with added dialogue from William Shakespeare, and some old faces making appearances too.

I’ve tried something a bit different with the Smashwords page, where readers can pay what they like. Hoping it encourage more downloads, and if people like that, they have other books to pick up too.

In the long term one thing I’m toying with is a hardback anthology of all Sir Edric’s nonsense, with some pencil sketches (either by proper artists or perhaps drawn by me if I can get to a sufficient level). But that’s very much off in the future, if it happens at all.

For now, buy Sir Edric and the Corpse Lord. The Dread Nine-Horned Goat of Pung-Fek commands it.

Posted by Thaddeus at 17:44 No comments:

This book, also known by the more pleasing title of The Chronographia, charts the history of the Eastern Roman Empire (or, more accurately, its leaders) from the formidable Basil II to the rather less impressive Michael VII.

The edition I read was from Penguin, with translation and introduction by ERA Sewter.

As an aside, the end dovetails almost perfectly with the start of Anna Komnene’s The Alexiad.

I found this to be an engaging read, with Psellus’ little anecdotes helping to bring the distant past alive. Psellus had significant roles in government with many of the emperors of whom he writes, and this does colour his judgement (he apologises repeatedly for writing honestly and pointing out flaws with Constantine IX, to whom about a third or a quarter of the book is dedicated).

The emperors, and a few empresses, are mostly described as flawed creatures, particularly those who squandered the vast treasure amassed by Basil II. Aided by an engaging and easy-to-read translation, Psellus’ thoughts help to paint a picture of the virtues and vices of Byzantium’s rulers. There’s very much a focus on biography rather than wider military or political history. It’s somewhat akin to Suetonius’ Twelve Caesars.

Occasionally Psellus meanders into self-regarding waffle (during the reign of Constantine IX, for example) wittering about what he’s said and is going to say, slightly repetitively.

The footnotes (and huzzah for those over endnotes) are extremely useful as they point out when Psellus might have a particular bias (although this can be obvious at times) and when he’s plain wrong. Not overused, they provide very helpful context for the reader.

The book ends suddenly. Not mid-sentence, but it’s abrupt, and Psellus’ fate and what prevented him finishing it is uncertain.

Overall, an interesting and engaging book about the rulers of the Eastern Roman Empire from the late 10th to late 11th centuries.

Posted by Thaddeus at 12:00 No comments: