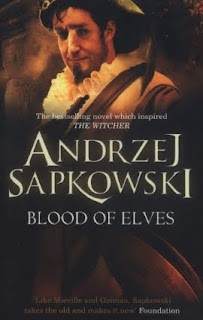 I really need to stop buying these books. I just don’t have any shelf space.

Which is a shame, because I enjoyed The Last Wish, and Sword of Destiny, but Blood of Elves felt quite a bit better.

We return to Sapkowski’s grim fantasy land, full of monsters and scheming, witchers and wizards. Once again the approach is of short stories with differing focal characters, but this time there’s a more central theme, revolving around a certain young girl.

The variety of stories is really interesting, ranging from lords contemplating ‘affairs of state’ and grand wars, to a bard who finds himself in a spot of bother. And, of course, we encounter everyone’s favourite witcher. All of the tales, however, hang together to tell a larger underlying story which is more than the sum of its parts. The differing styles also helps to make the world feel fleshed out and immersive, adding depth to the plot and characters alike.

I really enjoyed it. To be honest, I read a lot more slowly than I used to. Limited time and that sort of thing. But I rattled through Blood of Elves far faster than expected. If you liked The Last Wish/Sword of Destiny, you’ll like Blood of Elves even more.

Posted by Thaddeus at 15:48 No comments:

Disclaimer: I played these books as a child, so my reviews will likely be laced with nostalgia.

Flight From The Dark is the first of dozens of gamebooks that Joe Dever (initially with Gary Chalk, later solo) wrote. For those unaware, a gamebook is approximately halfway between a videogame or tabletop RPG and a book. The reader/player makes decisions to determine how they try and solve problems, win fights, and so on. It’s eminently possible to end up dead and have to restart.

Flight From The Dark is a thinnish volume but has 350 sections. The premise is simple: you are Lone Wolf, a lowly member of the Order of the Kai, hero-warriors who protect the good from the evil of the nearby Darklords. Unfortunately, you’re a slacker and have to miss a celebratory feast to go gather firewood as punishment. This saves your life as the Darklords roll up and kill everyone who attends, wiping out the entire order. 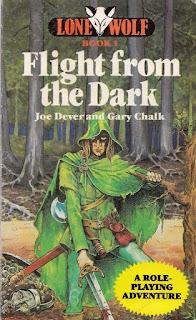 You must flee to Holmgard, the capital, to warn and help the king, evading or fighting the Drakkarim, giaks, kraan, and other monstrous servants of the Darklords.

Character creation is mostly about picking the Kai disciplines you have, everything from healing to animal kinship, psychic defence (or attack) to hunting. Choosing wisely is critical, and getting lucky when you ‘roll’ (you could use a d10 but there’s also a sort of random number generator by way of a grid of numbers at the back, from which you can pick blindly) for combat skill and endurance.

Smart choices also matter. Being heroic sounds good, but I only survived one entirely voluntary encounter by fluking a couple of great combat results. By rights I should’ve been killed. At other times my cunning strategy helped me evade fights that would’ve occurred, if I didn’t have the right skills.

It’s a fun introduction to Lone Wolf, Magnamund (the wider LW world), and gamebooks, and only takes an hour or two after you’ve created your own Lone Wolf.

I discovered shortly after writing the above review that Joe Dever died a few years ago. RIP. His Lone Wolf books were (along with books written by Bernard Cornwell) what I read the most in my early teens. Sad to hear of his passing.

For those interested, there are plenty of second hand paperbacks floating around, and I know he gave his blessing for Project Aon, a website which enables you to play the books for free. There’s also (though I’m unsure of availability) some hardback reprints from a decade or so ago, if you prefer physical books.