This is a work of historical fiction, based on the downfall of the Han dynasty in China (which lasted from around 200BC to 200AD). A word of warning: the book is hefty. There are various editions, the one I read (published by Foreign Languages Press and translated by Moss Roberts) was in four volumes and over two thousand pages long. 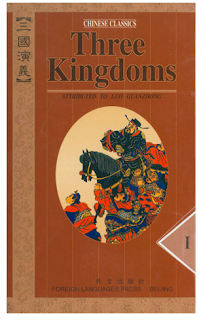 The plethora of names, some of which are very similar, can be a bit much to handle, but this also means that when you’re some way into the book the call-backs to earlier chapters allow for a complex, interwoven story (when a character saves another’s life, that may well have repercussions, good or ill). It also means a lot of characters get some depth.

Despite the number of characters, I never found the story too difficult to follow because the style is quite simple (and where things aren’t obvious, notes will explain). The large size of both the book and the period covered enables dramatic changes to happen both to characters and the kingdoms. Twists, treachery and death all happen with pleasing frequency.

It seems to follow history quite closely, and the notes make plain when this isn’t the case. Magic and supernatural things happen infrequently, more commonly supernatural explanations are given to natural phenomena (a helpful rain shower extinguishing fire, for example).

It could have done with a good proof-reading. The typos never caused me any confusion but, even given the book’s length, there are more than might be reasonably expected.

There are extensive endnotes, which range from the concise (explaining what date, in the Christian calendar, is being referred to in the text) to the lengthy. I generally found these to be useful and interesting (although I prefer footnotes to endnotes).

If you’ve read Journey to the West, or Outlaws of the Marsh, this should be to your liking (it’s more political than those books, however). If you’ve not read those, I’d advocate checking a sample just to see whether the style is something you like or not.

This is my second time reading the book, and I liked it rather a lot, more than the first time. The ebbing and flowing of power to and from the various factions and main characters, and the fact events occurred more or less as in the book, makes it deeply engaging.


Thaddeus
Posted by Thaddeus at 11:59 No comments:

I got this after being rather taken with a similar book about Medieval England, by the same author (reviewed here). 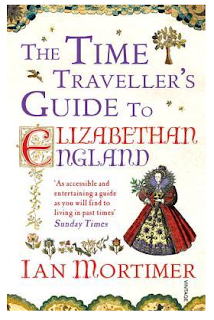 It’s history, Jim, but not as we know it. As with the aforementioned book, The Time Traveller’s Guide to Elizabethan England adopts a present tense approach to the past. It can seem a little odd, especially at first, but the style fits a history that’s almost a guided tour of everyday life. Entertainment, food, the weird way that chimneys and glass revolutionise housing and the persistent social divides of the class system abound.

However, it’s the area of religion which marks this era as most alien. In certain ways, contrary to the common assumption that things tend to improve over time, the 16th century seems crueller than those before, perhaps due to a combination of bitter religious rivalry and the uncertain nature of what might come after Elizabeth.

On Queen Elizabeth herself, there are frequent references (and even some poetry written by her). These range from the personal to the politico-religious, as she enforces her will and dominates the political scene during a time of great change. It is not a biography or anything approaching that, however [nor does it seek to be].

The writing is detailed and immersive without being difficult (this isn’t my sort of era usually so I thought I might feel like a fish out of water, but this wasn’t the case). As is common with such books, there are two sets of glossy pages with photographs relating to the time [I checked some reviews on Amazon, and apparently these do not show up well on the Kindle version].

As with the Medieval version (although more so) I did skim the lists (often regarding the price of various goods). Here and there sections seemed a little long, although it’s to be expected that with a general tour approach to history some bits will engage a certain reader more than others.

Overall, an easy to read history that occasionally overdoes the detail but generally gets the balance of depth and brevity right.


Thaddeus
Posted by Thaddeus at 12:17 No comments: