This review assumes that the reader has seen season 1. If not, there be spoilers ahead so you may wish to stop here. 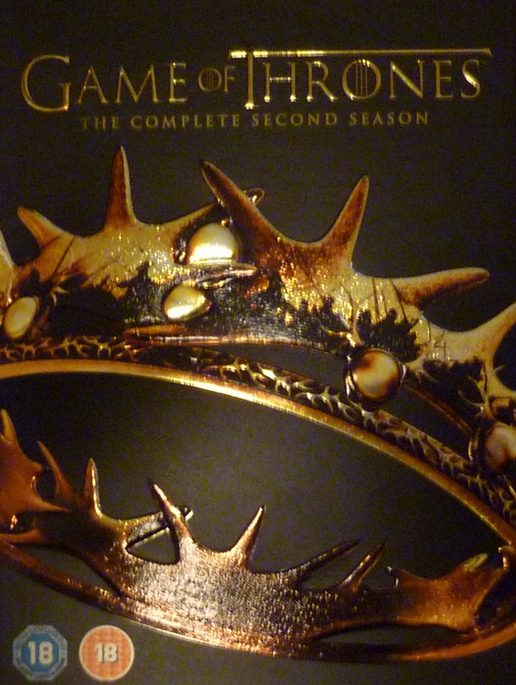 The second series sees a few new additions to the cast. Stannis, Davos and Melisandre are probably the most important. Happily, this trio have some very good interactions, and the Stannis/Davos relationship works well. Stannis would seem to be a very hard role to play, but Stephen Dillane manages to do it, aided by Liam Cunningham's Davos and Carice van Houten's Melisandre.

Stannis is just one of a pretty large number of contenders for the throne. Joffrey sits on it at the moment, but is challenged by Stannis, Renly, Robb and (over the seas and far away) Daenerys. The season charts their ups and downs, though the main focus is perhaps on Tyrion.

The dwarf has become Hand of the King, meaning he actually runs the kingdom, and proves rather adept at it. The little political jousts he has with Pycelle, Little Finger and Varys are entertaining, and we see more of his dysfunctional relationship with Cersei and his utter contempt for Joffrey.

The series does slightly feel the loss of Ned Stark/Sean Bean, early on. Because the actor was so good and the character so central his death does have a significant after-effect. That may be because when he (and Robert, who died approximately at the same time) died the end of a unified kingdom and universally acknowledged king came about. From season to season Westeros has moved from peace to war.

The younger actors remain a real highlight of the show. I know I wrote this last time, but child actors can often be a bit, well, rubbish, and seeing Arya hold her own against Tywin Lannister was great. Bran gets rather more airtime, which is good because in season 1 his role mostly involved getting thrown out of a window and lying down, whereas in this season he has a bit more opportunity to develop.

Joffrey remains a brilliantly convincing bastard, and the secondary but important character Jaqen[sp] was another one of my favourites.

The extras are broadly similar to last season, although I think the total number of commentaries has increased (not every episode has a commentary but several have two). Naturally some commentaries are more entertaining than others and on the whole I enjoyed them (perhaps most especially the one with the actors and director of episode 9).

In addition to commentaries there are a few other extras discussing characters, religion, and special effects. It's also interesting to learn just how little of the wilderness Jon Snow is traipsing around in was special effects (almost none) and how much was the natural scenery of Iceland.

Magic is not used very commonly (though more than the first season) and is rare enough to have a more substantial impact. Sexposition/info-humping is probably about as common as last season, and there's probably even more lovely violence.

My biggest complaint would be the unnecessarily long delay for its release (a year). A few more extras would, of course, have been nice but there's probably more than one commentary per episode (on average) plus 4-5 others, so it's not like they've provided a bare minimum.

As regular readers will know I'm not fond of ratings. I would, however, recommend buying this (after buying and watching season 1, of course).