Review: The Inheritance of Rome, by Chris Wickham

For a while I’ve wanted a book that bridged the classical-medieval gap, so this book, subtitled ‘A History of Europe from 400 to 1000’ seemed ideal.

And what a book it is. Taking us from the Western Empire’s latter decades to its disintegration, the fragmentation of power across Europe, the continuation, decline and rise again of the Eastern Empire, the birth of the Caliphate, its rise and fragmentation, England’s weakness and rise, the Merovingian and Carolingian peaks of Francia, the ebb and flow of power being centralised and divided.

Practically the whole of Europe is considered. The ancient equivalents of France, England, Spain, Germany and Italy get most coverage, with a lot about the early Caliphate and Eastern Roman Empire too. Ireland and Scandinavia are also written about, a little less, and other parts of Europe (mostly eastern) are covered in less detail due to less evidence. 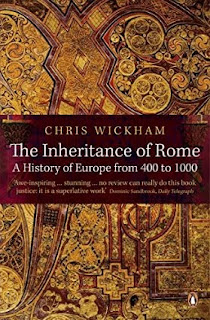 The book proceeds in chronological order, with differing parts having a different geographical focus. This works very well for keeping a tight enough focus to avoid the work becoming a sprawling mess, which could easily have happened, whilst at the same time providing the reader with a great breadth of information across both space and time.

The heart of the book is political, with the church, wider culture, and the economy also featuring heavily. It’s not militarily focused but significant military effects (perhaps most notably the rise of the Caliphate in the East, and Carolingian expansion in the West) are included where they impact upon politics, culture, and/or economy. Changes both between powers and within them (the relative power of kings, aristocrats and peasants, and how that altered over time) are considered.

I was wryly amused when the author criticised those who used ‘value-laden’ terms such as ‘prosperity’ when describing the changing nature of the peasantry up to 1000 AD, as the condemnation came in a chapter entitled ‘The Caging of the Peasantry’.

The maps, at the front of the book, are excellent, covering multiple geographical areas and time periods.

Downsides are few. Occasionally there’s slight clunkiness in phrasing, and I saw one mistake that’s obvious (the suggestion heading west from Dublin takes you to Great Britain) but otherwise there isn’t much to criticise. I do remember having some doubts regarding particular interpretations of history, but I do not see this as a flaw, as there are many valid but differing opinions regarding the past, especially periods for which documented evidence is limited. Although I didn’t necessarily agree with all the author’s views, they all seemed to me to be valid and reasonable.

This is not ideal as an entry level book for someone just getting into history, but for those with some background knowledge of classical and/or medieval history, and looking for something between those periods, it’s well worth reading.