Some time ago on The Wayfarer’s Rest* I had a little experiment, reading half a dozen or so samples from Kindle books. It was quite interesting, with some laden with info-dumping, others insufficient to let the premise unfold. Easily the best was the sample of the Blood and Sand Trilogy, by Jon Kiln, which I just finished reading.

The story follows Vekal, a Sin Eater (confessor meets martial artist), and opens as his city is being sacked by barbarians. After the engaging spot of initial action dies down, we encounter the central premise of the plot. Vekal’s forced to try and help the barbarian warlord’s daughter, who has a peculiar sickness, and finds himself possessed by a demonic spirit. But because he’s a Sin Eater, the devil is unable to totally control him, and the pair find themselves bickering and co-operating, sometimes doing what Vekal wants, sometimes doing what Ikrit wants. 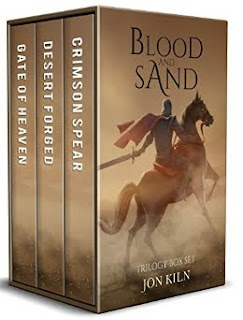 The plot holds together well, and one aspect I liked was that whilst Ikrit is clearly not a good chap, he’s also not just a moustache-twirling blacker than black villain. That would’ve made things a bit flatter, and less interesting. By humanising him, to a degree at least, he’s somewhat sympathetic (whilst still more than happy to kill people in the way). The relationship between Vekal and Ikrit varies from antagonistic to co-operative, as their goals coincide or diverge. It’s a nice take on things.

Besides Vekal/Ikrit, clearly the main character(s), there are a number of others who get some POV time. Naturally, they aren’t fleshed out quite so much, but I liked that many secondary characters had some depth to them.

The world is well-realised, and there’s a pleasant absence of info-dumping. It hangs in the background, as it should, whilst the characters get on with their adventuring. The low magic (hardly any is used) works very well, as possession or fear thereof provides the main arcane aspect of the story and world.

I do think the book could’ve been slightly better proofread. Should stress it’s not riddled with errors, and I do expect some in a novel-sized book, but there are perhaps a few too many (and sometimes phrasing’s repeated in short order).

In terms of sex, violence etc, there’s no frisky time and quite a lot of bloodshed, but it’s not as grim as many books.

Overall, I found Blood and Sand to be an enjoyable read.

*For those wondering, I liked posting more frequently but just lacked the time to do so. I may resurrect TWR one of these days, but the irregular rambles and reviews on Thaddeus the Sixth won’t be going anywhere. Unless I get decapitated by a low-flying flamingo, obviously. Then my blogging will decline dramatically.