Review: The Fears of Henry IV, by Ian Mortimer

I have to admit, I knew practically nothing of Henry IV, having not even read any of the relevant Shakespeare plays. However, I have read the same author’s biography of Edward III (review here) which helps put together the situation in which Henry IV (and his cousin and predecessor Richard II) found himself. 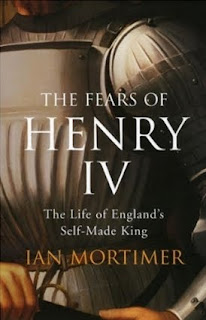 The dual nature of the early half of the book, with Henry’s actions practically defined in contrast and reaction to those of the vindictive and insecure Richard, was very engaging to read. Both men were intelligent and almost the exact same age, but their characters were utterly different (Henry was luckier than Richard in knowing his father well, whereas Richard’s died when he was young). Both struggled with the looming shadow of Edward III’s long and (mostly) glorious reign, being grandsons of the aforementioned king.

Not unlike a biography of William Marshal, the rollercoaster of Henry’s life is fascinating to read purely on its own merits. Ian Mortimer does a good job putting things into context where necessary, and letting the drama speak for itself.

Whilst Richard was sly, Henry was devout and personally brave. He was also bloody unlucky on numerous occasions, and his early reign damaged by naivety, the consequences of which took some time to overcome. He was, however, decisive and committed, which helped to stave off the worst effects of his frequent misfortune.

There are numerous interesting questions about Henry and how he ought to be viewed. As well as his unorthodox manner of arriving at the throne, he executed an archbishop, and generally struggled with money, which then hampered his efforts to fight the Scots/Welsh/French.

It’s a life well told, packed with political scheming and rivalry, family feuds and numerous rebellions. It’s very good, and would work well with (either before or after, as you like) the same author’s aforementioned Edward III biography.


Thaddeus
Posted by Thaddeus at 09:21