Almost the moment I finished The Wonder Book of Aircraft and was contemplating which book to read next, Spies, Sadists and Sorcerers was delivered.

It’s a collection of little chapters (some only a few pages but most a bit longer) focusing on individuals or events through history which are either little-known, or well-known but the author believes a contrary view to that of the general perception.

Took me a little while to get the angle, which is of provocative polemic. On that score, the book works very well as it’s never dull. Some chapters I strongly agreed with (the Elgin Marbles), and some I strongly disagreed with (Richard the Lionheart). I read the book much more rapidly than I anticipated, testament to the writing quality, but also disagreed quite strongly with certain aspects. 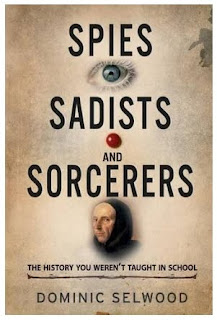 To take the Lionheart example, he’s largely condemned (with lip service to positives) and the reverse approach taken with Saladin. Both were men of their time. Richard spent most of his time warring in France, for which he was criticised, because we were at war with France. The only reason John didn’t spend more time there was because he couldn’t persuade the English to follow him very often. Likewise, Richard did kill 3,000 or so prisoners at Acre. But that does neglect the context of Saladin stringing out negotiations so Richard would struggle with food, water and guarding so many men. Not to mention Saladin killing Templar prisoners was mentioned but not that Saladin had only received their surrender after promising not to kill them. I’m not condemning Saladin for that, merely pointing out 12th century warfare wasn’t renowned for its loveliness, and mostly criticising Richard whilst praising Saladin is not consistent.

There was also a factual error in the statement Arthur of Brittany was 12 at the time of his murder, whereas he was 15 or 16.

Similarly, the Magna Carta section, whilst accurately stating the barons’ interests were first and foremost, does neglect some important provisions that applied to everyone. Clause 40, for example, reads “To no one will we sell, to no one will we deny or delay right or justice.” [From the version at the back of Marc Morris’ biography of King John].

Likewise, the religious persecution/executions under Henry VIII and Elizabeth I are laboured at length, yet the comparable acts of Mary are glossed over quickly.

However, I did find some of the chapters very interesting, particularly around the World Wars (not an era with which I’m overly familiar).

I think it’s the first history of this nature I’ve read, but I did enjoy it quite a lot. Some chapters were interesting and new, and I must admit to rather liking argument over history (would you believe some jesters insist Julius Caesar was a better general than Hannibal Barca?) so I didn’t mind disagreeing with the author’s perspective. There does seem to have been finger trouble here and there, not only with Arthur of Brittany’s age but also that of Ada Lovelace (it confused me at first because the dates given indicated she was 67 at her death, but it’s actually 37).

Assessing this is quite difficult, and makes me glad I don’t habitually score/rate the books I review here. I found it interesting throughout and read it far faster than I expected, given my limited reading time. On the other hand, the more I knew of a period of history the likelier I was to disagree with the author.

For those after books related to the sections I’ve highlighted, I’ve reviewed the following:
A Time Traveller’s Guide to Elizabethan England
By Sword and Fire
The Greatest Knight
King John


Thaddeus
Posted by Thaddeus at 11:42