I’m delighted to say I’ve been joined by Juliana Spink Mills, one of the authors (alongside myself) who contributed to forthcoming fantasy anthology Journeys (available for pre-order now, publishes 15 February).

1. Could you tell us the title and a one or two sentence premise of your story in Journeys?

My story for Journeys is called Fool’s Quest, and it follows a trio of mercenaries who have been hired by the king to track down the raiders who kidnapped his daughter.

2. When writing short stories for anthologies, do you prefer to have them be stand-alone or tied into your other works’ worlds?

I prefer writing stand-alone pieces, because they give me a break from the worlds I’m writing about in my longer works. Stand-alone short stories also give me a chance to play with something new without committing to an entire novel. 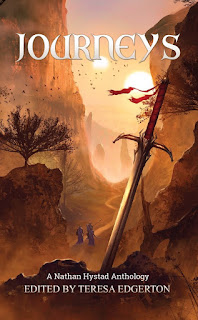 3. Over the time you’ve been writing, have you changed the way you do things, whether streamlining the process or moving from spontaneity to planning, or vice versa?

I used to be a rigid outliner when I first started out. It was the only way I could get to the end of a novel – I had to know from the start exactly where I was going each step of the way. I’ve loosened up a little now, and I find I work better with a rough general outline, more of a ‘connect the dots’ manner of writing. Though I still do detailed outlines for specific segments, like action or fight scenes that need careful choreographing.

4. Besides fantasy, the genre of Journeys, do you write in other genres or in differing styles (grimdark, high fantasy etc)?

I also write ‘light’ science fiction, like my story In Plain Sight in the Aliens – The Truth Is Coming anthology (Tickety Boo Press, 2016). And my Blade Hunt Chronicles series (Woodbridge Press) is a YA urban fantasy.

5. What are your inspirations? Are they mostly historical/literary, and how much do other modern writers influence you?

When starting a new story, I often begin with a setting or a specific feel I want to capture. History can play into it; one of my current projects is inspired by the 1980s gold rush in the Brazilian Amazon. As for other writers, I think if you read a lot, like I do, it’s hard not to be influenced to some extent. Though I think that having been an 80s teen may explain my fondness for car chases, fireballs, and narrow escapes – I blame movies like Die Hard, Indiana Jones, and The Goonies for that! [TW: +2 cool points for Die Hard/Indiana Jones references].

6. If readers enjoy Fool’s Quest which of your other works would you recommend they try?

Because of the fast pace of my short story, and the teen main characters, I’d definitely recommend my brand new YA novel Heart Blade, the first in a 4-book series.

7. Beyond your own work, what do you like to read?

Nowadays, I read mostly fantasy, though I’m pretty eclectic as to what I pick up within the genre – epic, urban fantasy, steampunk... Anything goes, really. I also enjoy science fiction. I’ve always loved kidlit, and since I focus mainly on YA and middle grade as a writer, I tend to mix up reading ‘adult books’ with books aimed at younger readers.

8. In between answering inane questions and writing, how do you like to unwind?

Reading, watching way too many SF/F TV shows, walking the dog. My Friday night longsword class is also a great way to end the week and unwind!

Thanks, Juliana. If you enjoyed hearing about Journeys and Heart Blade you can find out more about Juliana's writing here:
Website: www.jspinkmills.com
Twitter: @JSpinkMills

Thaddeus
Posted by Thaddeus at 11:20