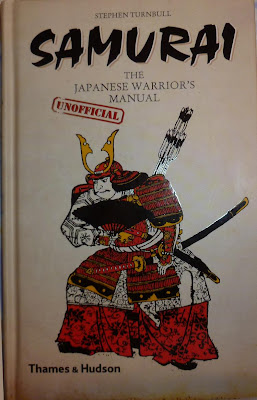 The fourth instalment of the fantastic Unofficial Manuals series follows those for being a Legionary, Knight and Gladiator.

Samurai and Japanese history generally is an area of which I’m mostly ignorant, and what little I do know comes from playing Kessen III for the PS2 and reading Musashi, by Eiji Yoshikawa. By happy coincidence, both basically cover the period (late 16th and early 17th century) with which the book is predominantly concerned.

Turnbull does a great job of mixing humour with interesting facts and snippets from Japanese history. The wit often includes a very British sense of humour, mingled with amusing references to the magnificent capacity for flowery language the samurai had.

As with previous entries in the series, Samurai focuses entirely upon one position and concisely describes the various aspects of that role. So, we learn that samurai are born rather than made (with certain Hideyoshi-shaped exceptions), that discipline in numerous areas are the mark of a good samurai, and that going to certain death is nothing to be worried about, provided your hair is sufficiently perfumed.

Our guide to being a samurai is a fictional chamberlain in the court of Tokugawa Ieyasu’s (the chap who established the long-lived Tokugawa Shogunate) successor. As well as detailing the role of a samurai and how to excel as such, the book also briefly covers the geography of Japan and furnishes the reader with numerous helpful, and often amusing, historical examples what to do and what not to do.

In addition to this there are a number of references to the recent arrival of Europeans (Portuguese, Spanish, Dutch and English) to Japan and the horrors (gunpowder, pox and Christianity) they brought with them.

It’s a great little book, very easy to read and crammed with interesting bits of information. The further reading in the back includes quite a bit by the author himself, however some time ago I did try finding a biography of Oda Nobunaga in English and couldn’t, so there’s probably a relatively limited selection in English.

I would absolutely recommend it to anyone who wanted a light-hearted but informative look at samurai.