Review: A History of the First World War, by BH Liddell Hart

A bit outside my usual area, but this military history seemed interesting, so I gave it a look. It charts the course of the war from beginning to end, including an introductory segment setting the scene.

Reminiscent of Dodge’s Napoleon biography (first volume), I actually found the political and military preamble to the war itself to be the most interesting part. Setting the scene with the Schlieffen plan and the varying states of readiness of the Great Powers was very nicely done. 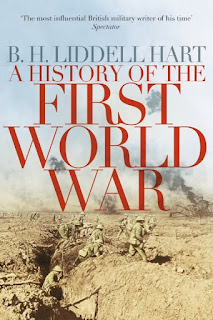 The war was notable, amongst other things, for the rapid invention and development of new technology with battlefield implications. The radio, rail, aircraft, gas shells, and tanks were all either created for the first time, advanced swiftly or otherwise had great military significance. Machine guns had existed for a little while by this stage but this was the first war when they gave near total predominance to defence over attack (until the tank rolled up).

It was fascinating to read of how the Germans really could have won the war early on, but for Moltke buggering up the plan Schlieffen had put together some years earlier, denuding the powerful right of strength whilst reinforcing the centre.

I’ve read enough military history (admittedly, mostly classical) to know that some wars are notable for their brilliant strategy, and some are remarkable for surprising incompetence or plain bad luck. The latter was not unique to the First World War (we need only look for how the Romans repeatedly mishandled the Cimbri for evidence that strategic/tactical idiocy and generals infighting can endanger a national cause). World War One does have the slight mitigation that new technologies were not fully understood (aircraft could have been employed on a more aggressive basis, for example), and the exacerbating factor that the same mistakes were made repeatedly, at immense cost of human life.

The sheer numbers of people involved is also worthy of remark. Tens of thousands (or more) fell during the largest battles, millions of men lived in trenches.

I must admit I sometimes found things a little hard to follow, although the gist was never in doubt. (I maintain that military history is more interesting before the use of gunpowder became widespread). There is a good number of maps, with many chapters beginning with a map of the local situation. A nice addition, which was not present, would have been something along the lines of a trench cross-section or the odd diagram of a plane, machine gun or tank, but it would’ve been an extra rather than some necessary that is missing.

It should be firmly stressed that this is a military history, and politics, excepting the interesting preamble to war breaking out, is mentioned only in so far as it directly relates to the war. Russia vanishes after the revolution and peace is agreed between the Bolsheviks and Germany.

The author does comment on both military and moral failings of generals when it comes to mistakes made (some understandable, others perhaps less so), and also those of the ordinary soldier. Whilst rarer, instances of soldiers performing misdeeds (such as advancing well, then coming across quantities of alcohol and getting lashed as a ferret on Christmas Day) are mentioned. That said, the focus of the book is clearly on the military aspects, with morale (and morality) considered alongside ammunition, supply lines, and so forth as a military asset, or deficiency.

Overall, I found the book interesting, occasionally a bit tricky to follow. As I’ve said before, its sole interest is the military side of things, so those after something considering the political or social implications of the war will find it lacking. Those seeking to understand the strategic and tactical situation that unfolded from 1914 to 1918 will find it of significant use.