By weird coincidence (really, this wasn’t planned) my novel Kingdom Asunder is just 99c from today (the feast of Saint Francis, patron saint of writing) until the 27th, and the Journeys anthology (which features a story entitled Black Sails by me, as well as contributions from the likes of Adrian Tchaikovsky, Julia Knight, John Gwynne and many more) is on pre-order sale for 99c until its release on 15 February. 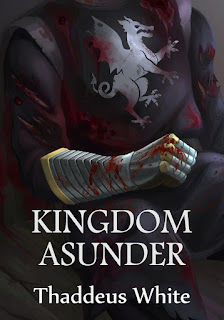 Kingdom Asunder is the first part of The Bloody Crown Trilogy, which sees the kingdom torn apart by rival families battling over the throne. It’s a story of fast-paced plotting, scheming traitors, and medieval warfare, as ruthless she-wolves, bloodthirsty warriors, and the men who would be king stop at nothing to bring down their enemies. Journeys, naturally, has a variety of fantasy stories with a focus on, er, the journey involved. Black Sails is the tale of Henryk, Gryzelda and Sonja, passengers aboard a vessel that finds itself sailing straight into a fleet of pirates. Can Henryk warn his city before it’s consumed by fire and steel?

So, there you are, two delicious Thaddeus White books for less than the price of a cup of coffee. The perfect remedy for the January blues.

Thaddeus
Posted by Thaddeus at 08:10