Review: Paw-Prints of the Gods, by Steph Bennion 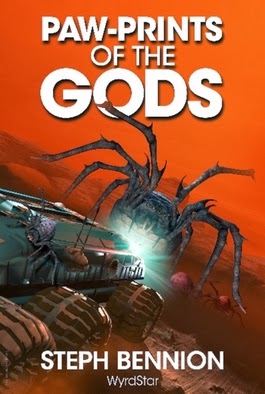 This book was the Other Book of the Month over at the Indie Book Club on Goodreads.

It’s a sci-fi story that takes place in the relatively near future. Mankind has now colonised about five star systems but has yet to make confirmed contact with aliens.

The story follows Ravana, a young archaeologist who wakes up to find herself in a dubious psychiatric hospital. It soon emerges that the sick minds present are not so much the patients as the staff, and that she’s been kidnapped and drugged up.

The opening chapter is one of the strong points of the story, as it has a nice air of creepiness without being over the top, and is perfectly paced.

As well as Ravana, we follow Quirinus, her father and captain of a largely wrecked ship, and intrepid reporter Fornax.

The dig site is the centre of the story, as is the question of what the ruins are for, who built them, and whether it’s a good idea to go poking around there. Archaeologists, the police, and the dodgy Dhusarian Church all have their own reasons for investigating the ruins.

An earlier book involving the same characters has been written (Hollow Moon), and initially there’s a nice little explanation of what went on. However, this is repeated and referenced a bit too much, I think.

The writing style is really easy to read. The characters are all well-written and distinctive. There’s a sense of humour throughout, and it generally works well. Although most of the story occurs in space or a desolate planet the sections with civilised (well, relatively) life do feel realistic.

As the story progresses (no spoilers) the way the various threads become ever more closely entwined, up to the conclusion, works perfectly. I do have a gripe, the only serious one, which is that the pacing feels a little off. A slower pace earlier on works fine, but I wish from the mid-point to the end it had been a bit faster, with a greater sense of urgency.

The maps at the back (of two star systems) are simple but do a great job of conveying what’s where (perhaps they would’ve been better at the front).

So, if you’re into sci-fi that’s light-hearted rather than grim I’d recommend giving Paw-Prints of the Gods a look.