So, The Last Jedi [spoilers galore]

I am, it’s fair to say, rather late to this tap dance. However, I did recently see this film. And so I thought I’d ramble about it (this is my blog, after all, home of rambling about sci-fi and fantasy. And history).

For those who haven’t seen it yet, this ramble will be laden with spoilers, so if you don’t want them, stop reading now.

Sometimes in really grim/serious films (Batman Begins, for example) I wish they’d add a little levity. I don’t mean change the overall tone, but people crack jokes, even if just as a coping mechanism in terrible situations. In World War One, when soldiers were pinned down in trenches with dead friends, they’d prop the bodies up (mimicking a soldier on guard duty) and shake their hand when they walked past. It’s ok to have a joke now and then, even if it’s still pretty grim.

The Last Jedi is the opposite. It’s ok to be serious now and then. Impending evacuation under heavy fire, wildly outgunned? Better crack a joke then. Waking up from some sort of medically induced coma? Slapstick and leaking time.

Star Wars has always been (mostly) family friendly (very friendly if you include the incestuous kissing in Empire Strikes Back). That doesn’t mean it can’t take things seriously, just occasionally, when dealing with what is, essentially, war between good and evil. Darth Vader could crack a joke (as Captain Needa discovered), but he was still a serious character. Hux is practically comic relief.

Captain Phasma and her rubbishness returns. Cool armour, lame turn of events. And then there’s Snoke (daft name), the pale imitation of Emperor Palpatine. But what really annoyed me about Snoke was how damned contrived and clunky the dialogue was when he ‘read Kylo Ren’s mind’ and saw him turn the lightsabre (yes, Americans, sabre is spelt this way in England) and kill his ‘true enemy’. … Decent twist to have him kill Snoke but the lumbering awkwardness of the dialogue and the mental hoops to jump through detracted from it.

In the same way JJ Abrams doesn’t understand the basic concept of space being big, it seems Rian Johnson didn’t understand the first thing about Star Wars. Or, if he did, he wanted to ‘interpret’ it (ie damn internal consistency) in the same way that Russell T Davies buggered up Davros’ character in New Who*. Luke, the hopeful hero who believed he could turn Darth Vader, apparently now thinks about killing his own student whilst he sleeps, and attempts it in such an incompetent way he accidentally turns said student evil. And is also capable of being defeated by same student.

Not only that, Luke apparently knows how to speak Wookie less well than Rey, who helpfully translates what Luke’s close friend Chewbacca has to say.

The plot wasn’t hugely engaging. Star Wars does get knocked for rehashing the Death Star story (although it’s worth noting that The Empire Strikes Back had nothing to do with that and is the best film by a mile), but this effort did make me wish there was a superweapon on the loose.

The storyline is that they need fuel after evacuating. The First Order is chasing down the tiny remnants of the Rebellion. Rightyho. Not the most engaging plot ever.

I do disagree with some criticism I’ve read. Rose wasn’t my favourite character but she wasn’t terrible.

Some have criticised the revelation that Rey’s parents were not especially significant, but I don’t think that was a problem at all. Not everyone has to be related. Plus, the weird relationship she develops with Kylo Ren would’ve been, er, a bit weirder if they’d been related and she *had* been Luke’s daughter.

I think Luke appearing effectively as an astral projection to Kylo Ren was fine (that’s a new power rather than one which contradicts previous rules of the universe), although his inexplicable death afterwards was both nonsensical and a very stupid way of killing one of the franchise’s key characters.

It was absolutely irrational that Admiral Holdo decided to ram, at hyperspeed, Snoke’s ship. And that it worked. Yes, noble self-sacrifice, etc. But it doesn’t actually make any bloody sense at all. The premise was that the Rebel cruiser was the only ship that could be tracked and therefore the smaller escaping ships would be safe as all First Order attention would be on the cruiser Holdo was piloting. She was drawing it away and would be killed (the plan was foiled when the First Order was able to fire on the smaller ships after all).

So why not ram Snoke’s ship to start with? If you’re certain to die and the options are to die alone or take down a huge ship and thousands of enemies, why wouldn’t the latter be your first option? For that matter, why wasn’t that approach used with the Death Stars? Or the Starkiller base? You don’t even need a human aboard, just get a droid to pilot a large, empty ship. I’m really not a fan of plot ‘twists’ that don’t actually make any sense.

I’d quite like to watch Phantom Menace again to have a side-by-side view of the films. I suspect the prequel would look good by way of comparison.

The flaws with The Last Jedi, besides an uninspiring story, is that it contradicts what’s been previously established, most obviously with Luke’s character. It also has a lot of stuff that just feels unrealistic (yes, it’s sci-fi and gets to break rules on faster than light travel, but even fantastical stories have to maintain their own rules and have some semblance of contextual realism. Otherwise Snoke could just snap the Rebel ships in two using the power of his mind).

I tend not to do film rambles/reviews, so didn’t post about this before, but I thought Rogue One was pretty good. Had weak spots, of course, but I liked the sense of certain doom, loved the ending, and, although some better characters would’ve been good (likewise if the pointless monks had been axed) it was a decent film.

The Last Jedi is the weakest of the Star Wars films I’ve seen (all except Solo). I do think the reaction has been over the top. Whilst not a great film, it’s still just a film. Pouring abuse over people is not limited to those who hate The Last Jedi, but it’s depressing to see (videogame developers, politicians, almost anyone in the public eye can get dogpiled with venom, sadly).

I’ve seen a little of the fallout from the film. Boycott for Solo, hate for Rian Johnson and the actress who plays Rose and so on. Disliking a film is fine but personalising hatred online is just wrong. It’s like complaining the well water is brackish and pouring in poison.

Anyway, those are my rambling thoughts on The Last Jedi.

*Spoilers for Doctor Who:

Davros’ whole character arc was creating the daleks, being betrayed by them and then trying to (and eventually succeeding) in reasserting control. Then in New Who, he actually agrees to be the compliant captive of the dalek leader. Utter tosh. Tosh, I tell you!

Medea and Other Plays, by Euripides 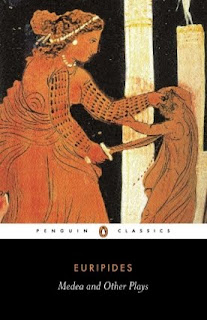 I read this some time ago (maybe 15 years now) and reacquainted myself with this excellent little book recently. My edition is the Penguin version, translated by Philip Vellacott. The plays included are Medea, Hecabe, Electra, and Heracles.

Each play is a tragedy, the collective lesson of which appears to be that fate is cruel and you’re probably going to be vengefully murdered by a close friend or relative.

The plays are all very short. Despite there being four included, the page count (including the introduction and endnotes) is scarcely above 200 pages. This makes each play more or less a premise developed within a scene. However, this is done in an excellent fashion.

Euripides is extremely good at eliciting sympathy for someone’s unjustified plight, and then making one wonder whether the consequences of their anger are worse than the causes (to paraphrase Marcus Aurelius). The sense of human tragedy is not eroded one iota by the long time that has passed since the playwright’s lifetime in the 5th century BC. If anything, that prolonged period highlights the unchanging essence of human nature, of tragedy, cruelty, the will to revenge and the irresistible twisting of fate.

The plays all feature characters of some note in Greek myths, but for anyone not up on that the premise is clearly laid out so foreknowledge is not required.

I tend to go for history over literature, but this is a very good quartet of plays. If I didn’t already have a to-read pile I’d probably be looking at buying some more of Euripides’ works.

Downsides are few but clear. Endnotes remain the work of Satan, and they’re (rather oddly) not even flagged up in the text with small numbers or asterisks.

All in all, an excellent book.

Posted by Thaddeus at 12:55 No comments: