Review of Fool’s Quest (book 2 of Fitz and the Fool), by Robin Hobb

Alarmingly quickly after finishing the first book (reviewed here) I polished off the second in this third trilogy by Robin Hobb. I’ll keep things as light as possible but there will necessarily be spoilers for the first book below. 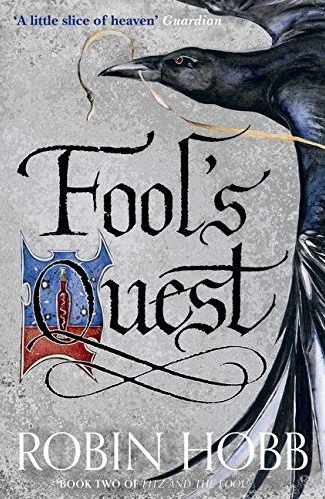 Lashings of anguish and concern lace the storyline, which has twists that turn things around in a way that’s credible and fits perfectly with the characters and plot.

Bee and Shun have been taken, but Withywoods is far from Buckkeep and a lingering curse means word will be a long time coming. Will Fitz and his allies find out in time, or will his daughter and ward be spirited away to the unknown realm of Clerres, out of reach forever?

The story feels quite close rather than being grand in scale, but loses none of its impetus or urgency for that. Indeed, the more personal stakes make it more immediately sympathetic than a global war or suchlike. As an undertone, the ageing Fitz seeing the court change around him and his old ways becoming outdated has a sentimental realism that can be readily appreciated, whether the reader is old or not.

As before, I read this book far faster than my usual rather sedate pace, in much the same way I eat chocolate rather more enthusiastically than lesser treats. I’m taking a short break before I start the third and final book.

Posted by Thaddeus at 11:06 No comments:

Fool’s Assassin (book 1 of Fitz and the Fool), by Robin Hobb 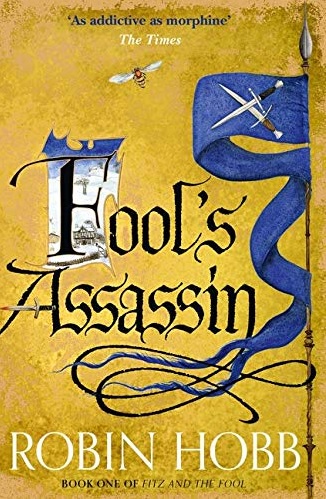 What to say about this book? It’s as effortless and excellent to read as one can imagine, and brings me right back to the preceding trilogies, which are amongst the best fantasy I’ve ever read. Hobb excels at placing a reader in her characters’ shoes and extorting emotive responses (don’t think I’ve ever encountered a writer better at that). And this return to Fitz and the Fool is no different.

We return to an older Fitz, in a sort of relaxed retirement at his father’s old country estate. All is well, which is a sure sign it won’t be that way for long. He’s still in touch with old friends in the capital but isn’t really involved in politics, and hasn’t assassinated anyone for quite some time.

It’s Winterfest, and a messenger turns up. But what’s the message, and who’s the sender? And who are the unknown strangers that have shown up?

This is the third of a series of trilogies, so it makes little sense to start here if you’ve never read the previous ones, (the Farseer and Tawny Man trilogies) but if you have these continue the story in splendid fashion.

Posted by Thaddeus at 10:04 No comments:

Review: Rome and the Mediterranean, by Titus Livy

This is the last of Livy’s books I had to read, and is also the last in chronological order, dealing with Rome’s antics primarily in Greece and Asia Minor (with other diversions in Iberia and Italy) during the first half of the 2nd century BC.

It follows shortly after the end of the Second Punic War, so Hannibal is still around, as is Scipio Africanus, and it’s interesting to note that neither great man ended his days as he perhaps deserved. This is very much a purple patch for Republican Rome, a time of successful wars and expanding influence, the most significant steps since claiming Sicily in the journey to transforming the Mediterranean into a Roman pond.

Livy, as ever, is very easy to read and his mention of sources (often disbelief in lesser historians and backing up some details by citing Polybius as the origin) is useful. Perhaps more than the military endeavours it’s the individual (or cult) human stories that make the greatest impression. Philip V of Macedon and his family squabbles are a true classic tragedy, and the alarming changes and rise of Bacchus’ worshippers was as engaging to read about as it was disturbing. 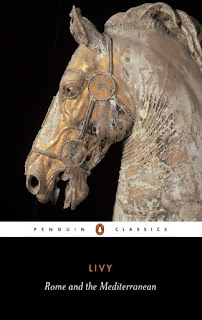 There’s a pretty much continuous run of wars, primarily focused on Greece. The Romans receive an invitation to thwart Philip’s hegemonic ambitions and, given he sided with Hannibal during the Second Punic War, the Romans are only too pleased to accept. To the west, Iberian tribes continually rebel, and lose, and end up being pacified at the point of a sword. Similarly, Gauls in northern Italy reacquaint themselves with the hobby of losing to Roman armies.

And yet this military dominance is starkly contrasted by the seeming increase of bending the rules of the state, allowing personal feelings to override a sense of duty. The enervation of discipline in the luxury afforded by victory may have its very earliest origins here. The Bacchic depravities are the most obvious sign, but there are vendettas in the Senate (although these were present earlier as well). Some stark counterpoints exist, such as Marcus Porcius Cato and Lucius Aemilius Macedonicus, but the former was loathed for his energetic time as censor and the latter had to fight his own troops to be awarded a triumph because they disliked the old-fashioned discipline imposed upon them during his successful prosecution of the final war against Perseus’ Macedon.

It’s also interesting to note certain families having great sway and wondering how the early empire might have looked if we’d have Aemilius, Metellus, or Flaminius as the noble family rather than the Julio-Claudians of Caesar.

In short, if you enjoyed Livy’s other books you’ll certainly enjoy this one.

Posted by Thaddeus at 10:28 No comments:

At the time of writing, I’m reading Rome and the Mediterranean, by Titus Livy, the last of his works I have to read. But I also have a pretty hefty reading list of mostly fantasy books and for those looking for something to sink their teeth into I thought a menu of fantastic fare might prove useful (not least as many will soon be getting bookstore gift vouchers and the like).

I’ve read the first three Chronicles of the Black Gate, by Phil Tucker, and really enjoyed them a lot. They’re set in a fictional world with different parts accessed by various gates (the Black Gate leading somewhere rather horrid, and the White Gate opening the path to Heaven). The plot has nice twists and turns, and the characters shift and change in a credible way that makes friends into enemies and vice versa. It’s entertained me so far and I will be buying the later entries at some point.

Whilst we’re on sequels, I’ve really enjoyed the Stormlight Archive series by Brandon Sanderson. Especially good for fans of enormo-books, the latest instalment, Rhythm of War, came out in November (part 4, I think) and each entry is about 1,200 pages. Lots of world-building, interesting backstories and epic fantasy for those with a voracious appetite.

Chris Wooding’s Tales of the Ketty Jay is a quartet of rollicking adventures in an engaging steampunk world. Annoyingly, I’ve already read them. However, he does have another series, The Darkwater Legacy, and I’ve been meaning to give that a look. And if you haven’t read Tales of the Ketty Jay I can strongly recommend it.

I recently read and reviewed The Faithful and the Fallen part 1: Malice, by John Gwynne. It took me a little while to get into it, but the plot twists were very nicely handled and the finale was excellent. The sequel is called Valour, and is on the ever-growing monstrosity that is my reading list.

A couple of months ago my internet fell off, so I had a few days with limited distractions and no possibility of work. Luckily, I also had Half A King by Joe Abercrombie, which I absolutely devoured in a couple of days (fastest I’ve read a book for an awfully long time). The other two parts in the Shattered Sea Series are most definitely to be read in the future.

In the more distant past I wrote some Snapshot reviews, reviewing just the samples of various books. I found this pretty fun and also discovered some very promising stories, most of which I haven’t read yet due to my inability to bend time.

The Copper Promise, by Jen Williams, was right up my street, an old school fantasy of treasure hunting and torture.

Kingshold, by DP Woolliscroft, had an intriguing setup of a kingdom shifting from monarchy to democracy and a range of engaging POV characters, and is something I’ve always intended to read in full.

The Thief Who Pulled On Trouble’s Braids Michael McClung, and Dangerous to Know by KT Davies both piqued my interest and opened series focusing on thieves with intriguing premises.

Those are just the things off the top of my head. There are plenty more great samples I encountered during the Snapshot reviews, and hopefully, if you like fantasy, that’ll provide you with some ideas of what to consider if you’ve got money to burn and aren’t sure what to try next.

Posted by Thaddeus at 15:46 No comments: